In 2013 the Town contracted with the Middlebury architectural firm, Vermont Integrated Architecture, to design an attractive entrance which would bring the building into compliance with the Americans with Disabilities Act, and to add a new rear two-story addition. The project included a new access ramp, portico, elevator to the second floor, accessible bathroom, a second egress stairway from the second floor, a new second floor heating system, and a newly constructed meeting and reading room which has been named the Smead Vermont Room.

A stained and etched glass name panel for the Smead Vermont Room is being designed from glass panes salvaged from the belfry that had been removed in 1937. A newly constructed bright and cheery Huntington Children’s Room and a new librarian’s office was added to the first floor. Chuck Adams Builder, Inc. of Bethel was the contractor on the project. The Rochester Public Library graciously hosts the exhibits of the Rochester Historical Society on the second floor.

The Library opened its newly renovated spaces to the public at a Gala on Saturday, November 8, 2014. 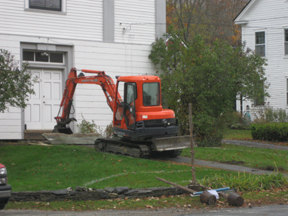 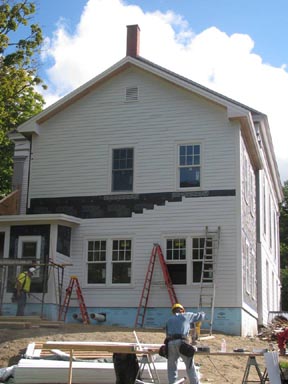