Our library is the heart of the town, a gathering place and forum where intellectual freedom and access to information is valued as the basis of our democracy, our culture, and our community. 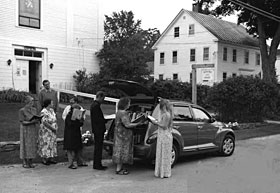 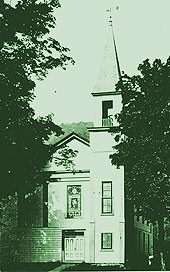 Twenty years later, in 1895, the first Board of Trustees was elected into office at town meeting.  As a new public institution, the library became eligible for financial aid through the state board of library commissioners.

From 1910-1936, the library moved around from private homes to the side room of a local business.  Despite these moves the collection grew to over 3,500 books.  In 1937, Chester E. and Leslie D. Pierce deeded their property, which had been the home of the Universalist Church Society on South Main Street, to become the permanent home of the library.  A WPA grant paid for renovations and building repair.  During the 1940's, records indicate that the state book mobile visited often and many new books were purchased.  Another WPA grant provided much needed labor and training for book repair and preservation.

In 1966, a monetary gift in memory of Dr. William M. Huntington allowed renovation of the old church kitchen into the Children's Room we know and love today. During the 1980's a historic preservation grant was secured to refurbish the stained glass windows on the upper floor. The Intergenerational Art on the Park project installed the colorful painted mural around the perimeter of the Children's Room during the summer of 1999.  By 2001, expanded interlibrary loan services, on-line public access and an expanded collection of over 15,000 titles ushered the Rochester Public Library into a new century.